The Commerce Recurring module provides a variety of options for creating subscriptions. You probably have a general idea of what subscriptions are. You might have a monthly magazine subscription or a subscription for a streaming video service, or you might be enrolled in a cheese-of-the-month club. But exactly how are subscriptions different than regular products in Drupal Commerce? Normally, when an order is placed, the customer is charged for the product, just once, at check-out. With the Commerce Recurring module, you can instead charge a customer repeatedly, at regular intervals, starting at the time the order is placed.

Billing periods are contiguous and represent half-open ranges (i.e., the end date is not included in the duration).

A billing schedule is powered by a billing schedule plugin, which is responsible for generating the billing period. Out of the box, the Commerce Recurring module supports rolling and fixed billing periods. Rolling periods start at the moment of subscription and last until the configured interval passes. Fixed periods start at the beginning of the configured interval (some number of hours, days, weeks, months, or years). 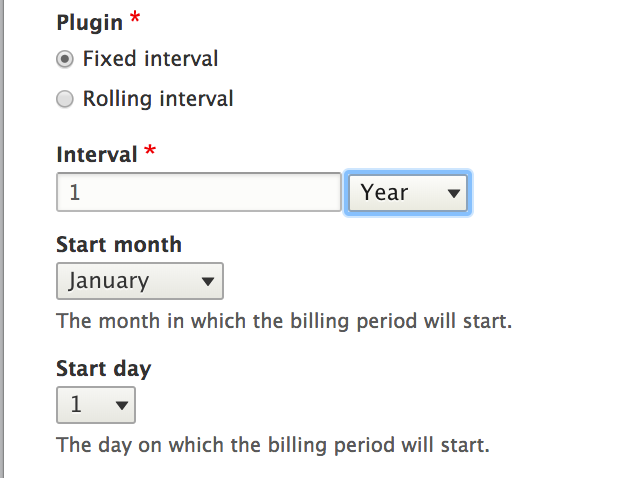 In other cases, such as a magazine subscription, proration might not be appropriate. A magazine is a physical product, and its usage is not time-based, so using the proportional prorater plugin doesn't make sense. Instead, the Fixed-Price prorater plugin should be selected for the billing schedule. The fixed-price prorater plugin will not reduce a subscription's price in shorter-than-usual billing periods; the full price will always be charged.

As long as a subscription is active, the customer is automatically charged at regular intervals for the continued usage of the subscription. If the attempt to collect payment from the customer fails, the billing schedule's Dunning settings are used to determine what should happen next: 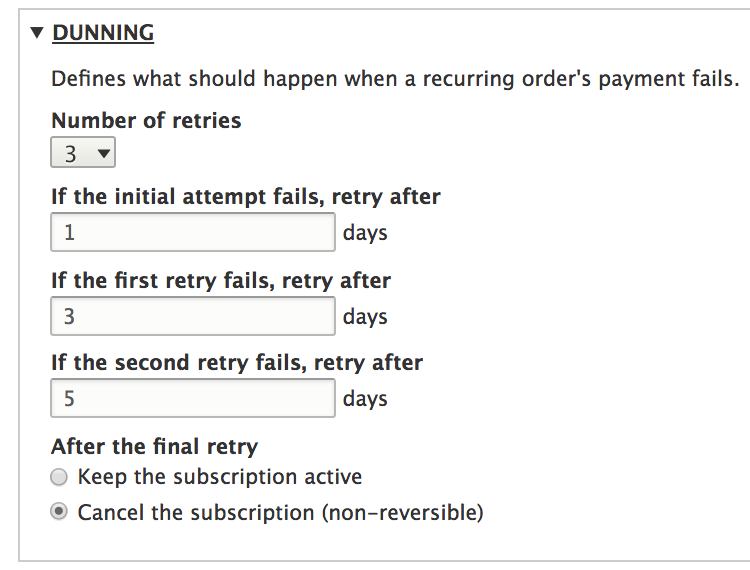 Found errors? Think you can improve this documentation? edit this page